Most young suspects in 2014 were registered in The Hague: 4.5 percent of the total number. The percentages in Rotterdam and Amsterdam were 4.1 and 3.9 respectively. Most small rural municipalities, e.g. in parts of the Green Heart area and in Overijssel province have a relatively minor share of young people as crime suspects.

Share of registered suspects in every 10 thousand young people (12 to 25 yrs) by municipality, 2014 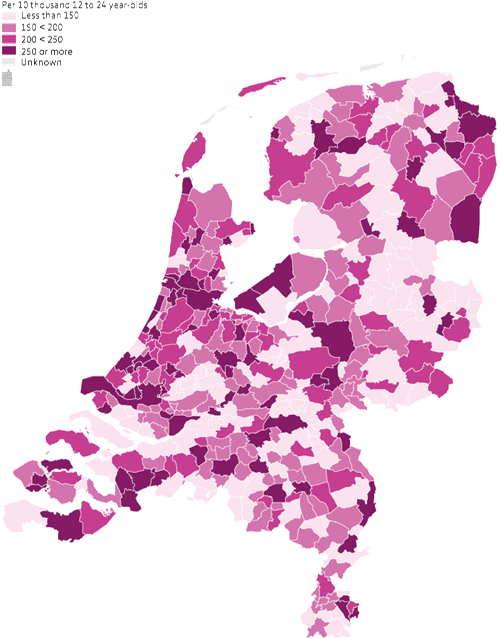 The number of young suspects is closely related to the degree of urbanisation in a residential area. In most urbanised neighbourhoods, over 3 percent of the young population are suspects, versus an average of 1.6 percent in the least urbanised areas.

The percentage of registered suspects is generally much smaller among minors (12 to 18 years) than among young adults (18 to 25 years). In the highly urbanised areas, however, the majority of suspects are the minors, due to the proportionately high number of offenses against property that are committed by minors in these areas such as theft and vandalism.fact