More and more underage children live with one parent

One in five 17-year-olds grow up with one parent

The family situation in which children grow up has changed in the last fifteen years. More and more underage children live with one parent: 11 percent in 1999 compared with 15 percent in 2014. Just over 8 percent of new-born babies live in a one-parent family. For children aged 17 this rises to nearly 20 percent. In 2013, parents of just over 34 thousand children got divorced. Children who grow up in a one-parent family, most of them with their mother, are generally more vulnerable than children who live with both their parents. They have a higher risk of growing up in poverty and are more likely to drop out of school without a basic qualification. 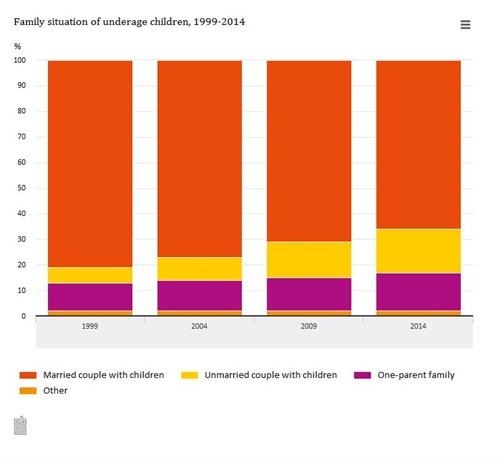 As fewer couples are getting married, too, fewer children are growing up with married parents, and more of them with cohabiting parents.

The large majority (eight in ten) of babies born in 1998 lived with two married parents on 1 January 1999. As these children grew older, this share decreased; at 15 years of age seven in ten still lived with married parents. Others experience the divorce of their parents or the death of one parent, leaving them to live with one parent, sometimes temporarily. On 1 January 1999 nearly 6 percent of new-borns were living with one parent, while at 15 years of age 19 percent live with one of their parents. Some parents meet a new partner: nearly 8 percent of 15 year-olds live in a family with a stepmother or stepfather. 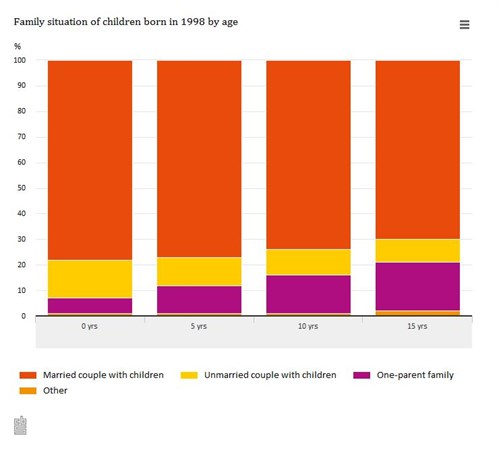 Nearly one in ten babies born to single mothers

Some 175 thousand babies were born in the Netherlands in 2014; nearly one in ten lived with one parent from the moment they were born, in nearly all cases their mothers. In 2013 the number of births was the lowest for the last thirty years, at 171 thousand.