The number of young people under 18 has declined by 170 thousand since 2005. The Netherlands had 3.4 million minors at the start of 2015, amounting to 20 percent of the total population. The number of minors is expected to continue falling over the next few years by 90 thousand until 2023. The decline will occur in almost every region, in particular Achterhoek and Zeeuws-Vlaanderen. On the other hand, the Randstad urban conglomeration still sees an increase in the number of young people.

Many minors on Urk, few in South Limburg

There are relatively many minors in and around municipalities along the so-called Bible Belt. Urk has the highest share with 35 percent, followed by Staphorst with 29 percent. Fast-growing municipalities on the outskirts of large cities are also relatively young. For instance in Pijnacker-Nootdorp near The Hague and in Houten near Utrecht, more than a quarter of residents is a minor. South Limburg has relatively the smallest share of young people in municipalities with an average 16 percent.

Percentage share of young people (0 to 18 years) in the total Dutch population by municipality, 2015 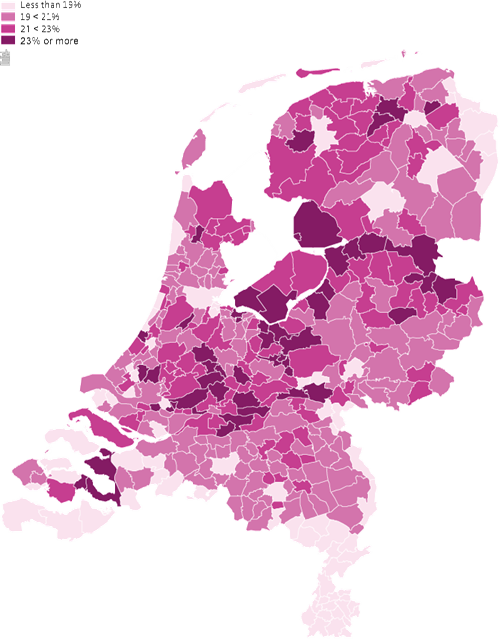