In 2019, more young people were receiving youth care than in 2015. On the other hand, there were relatively lower shares of young children in families living on income support, third-year secondary general students at VMBO, and young registered crime suspects. Youth labour participation was relatively higher while alcohol consumption remained unchanged in this period. Statistics Netherlands (CBS) reports this based on figures regarding key indicators and the use of youth care, published today in the Annual Report of the National Youth Monitor 2020.

Since the implementation of the Youth Act five years ago, municipalities are responsible for all forms of youth assistance. The Annual Report of the Youth Monitor outlines the use of youth care over this particular period. In addition, five key indicators present the situation among young people in the broader sense, including children living in families on income support, third-year secondary general students at VMBO, young registered crime suspects and alcohol consumption. 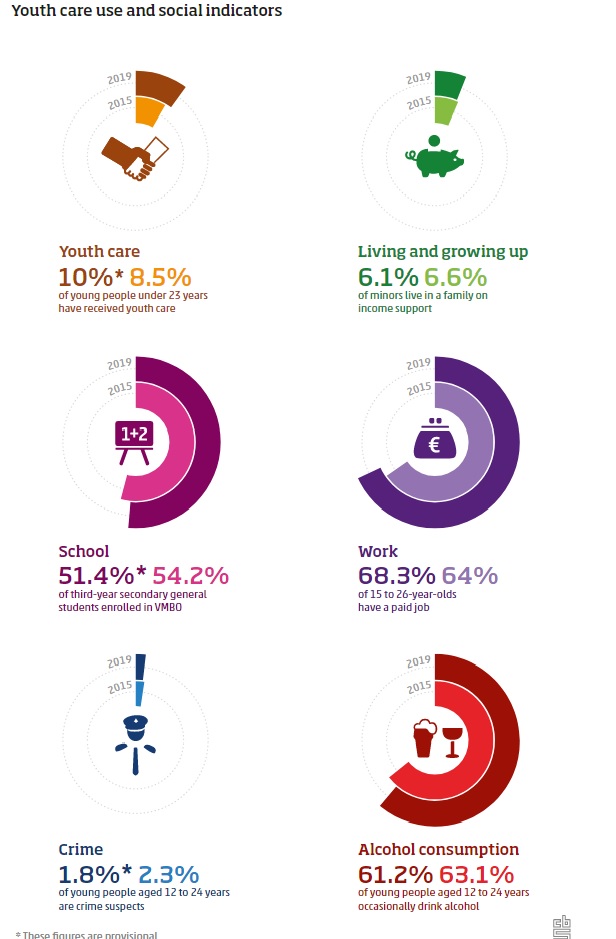 Number of children on income support continued to decline in 2019

At the end of 2019, there were 204 thousand minors (under age 18) living in families who were receiving income support. This is equivalent to 6.1 percent of all minors. In 2015, this share stood at 6.6 percent. Until 2016, the share of children on income support was still increasing. The aftermath of the previous economic crisis and a larger influx of refugees were the main driving factors. The percentage share has declined over the past three years.

In the school year 2019/’20, there were nearly 194 thousand students in the third year of secondary general education. Over 51 percent of these students were enrolled at VMBO level. This was still 54 percent in 2015/’16. The decline in the share of VMBO students is mainly seen in the basic vocational track. Over the years, the share of pupils in this track (VMBO-basis) has fallen while numbers have increased in senior general secondary education (HAVO) and pre-university education (VWO).

Youth labour participation up in 2019

No change in alcohol consumption levels between 2015 and 2019

According to provisional figures, in 2019 nearly 55 thousand young people aged 12 to 24 years were registered crime suspects, equivalent to 1.8 percent of all people in this age group. This represents a modest increase on 2018, moving away from the downward trend that was seen in previous years. In 2015, a share of 2.3 percent in the young population were registered as crime suspects (ILO definition).

The Annual Report 2020 edition of the National Youth Monitor provides an overview of the situation among the young population of the Netherlands. The overview contains a set number of key indicators to show developments and regional differences in different areas. The Annual Report describes more topics than are covered in this news release. The Report primarily covers developments up through 2019. At present, CBS does not yet have figures available for all the indicators and topics in the Annual Report to compile an update on the situation for young people during the coronavirus crisis.