1 in 3 women with technical degrees work in engineering

After completing an engineering programme in higher education, many young men choose professions different from young women with a similar degree. Of the 55 thousand men between 25 and 35 years with an engineering diploma, 47 percent have technical occupations, often working as engineers or technicians in civil or environmental engineering. Among the 15 thousand women who studied engineering, 29 percent worked in technical occupations, often as engineers or architects.

Among young engineering graduates who do not work in technology, women are relatively more likely to have a commercial or creative and linguistic profession. They work in such occupations as graphic designers, marketing consultants or artists. Men who do not start in a technical job are more likely to work in the ICT sector. 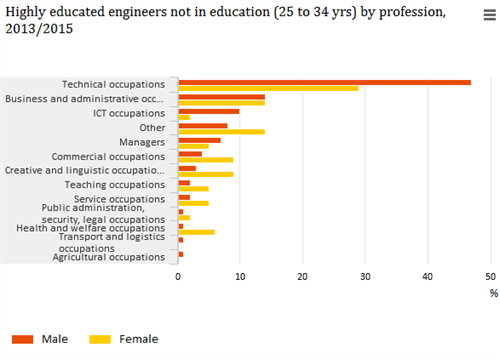 Percentage of technical graduates down

Ten years ago, 12 percent of people between 25 and 35 years old had completed technical training in higher education. Now, this is down to 9 percent. Among men, this dropped from 20 percent in 2005 to 16 percent in 2015. For young women, the percentage fluctuates around 4 percent. 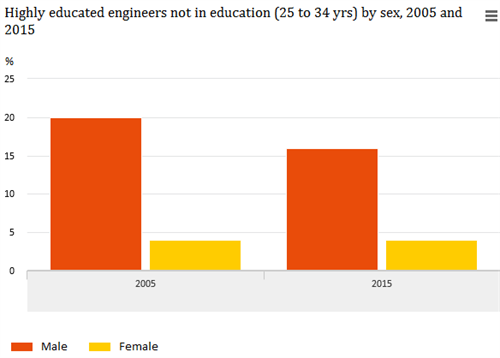 In recent years, subject combinations of science and technology have become increasingly popular with boys and girls in both senior secondary general education (HAVO) and pre-university education (VWO). Furthermore, the number of students entering higher technical education is rising, although the increase is less strong than in secondary education.

Netherlands in rearguard of EU

In 2014, few young people in the Netherlands completed technical studies in higher education (8 percent) compared to other EU countries, with only Luxembourg scoring lower. In Germany, 20 percent of graduates received a technical degree, two and a half times as many as in the Netherlands.

The number of men and women graduating in higher technical education is decreasing in all EU countries, not just the Netherlands. However, significantly fewer women received a technical degree in the Netherlands than women in most other EU countries. In 2014, 3 percent of women obtaining a diploma had completed technical training; only Ireland and Luxembourg scored lower. The percentage is considerably higher in Germany at 8 percent. 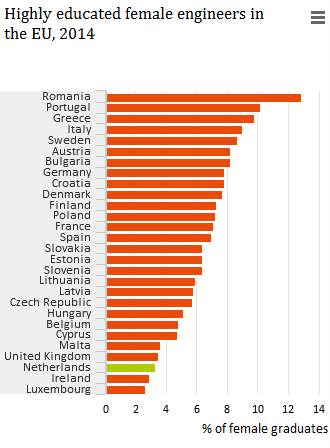