U bevindt zich hier: Home Many young smokers in the north

Many young smokers in the north

Between 2010 and 2014, over 14 percent of young Dutch between the ages of 12 and 20 were smoking. This percentage is particularly high in the north of the Netherlands. The share of young people smoking is highest in the province of Drenthe (19 percent), followed by the province of Groningen and the northern Netherlands region, each with 18 percent. The lowest share of smokers aged 12 to 20 is found in the middle region of the country. The municipal health care regions of  Amsterdam, Utrecht and the Gooi- en Vecht area report a percentage share of 11 percent young smokers.

Among the 12- to 20-year-olds who smoke, 63 percent do so daily, while 7 percent are heavy smokers. A heavy smoker smokes 20 cigarettes or more per day. There is no difference between boys and girls in this respect. The percentage of smokers goes up steadily with age, from less than 1 percent of 12-year-olds to 31 percent of the 20-year-olds. The numbers also vary according to ethnic origin. Non-western immigrants in this age group smoke less often than native Dutch and western immigrant young people (15 and 17 percent respectively). 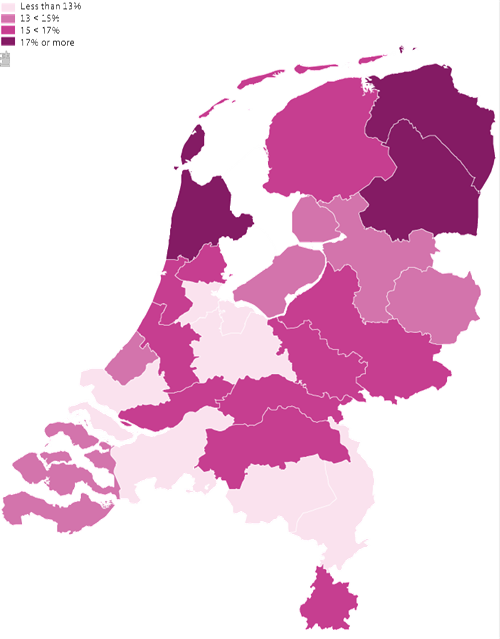