Nearly half of the 15-year-olds in the Netherlands are attending a form of pre-vocationalsecondary education (vmbo) in the academic year 2014/’15. The share is particularly large in the provinces of Groningen and Friesland. The number of vmbo students provides an indication of the educational level of young people in a municipality.

Over two thirds in Marum are attending vmbo

In the academic year 2014/’15, 70 percent of the 15-year-olds in the Groningen municipality of Marum are attending pre-vocational secondary education (vmbo), the highest proportion among all Dutch municipalities excluding the Wadden Islands. In addition, relatively high numbers are attending vmbo schools in the municipalities of Grootegast (Groningen) and Kollumerland and Nieuwkruisland (Friesland). On the other hand, the municipalities of Oegstgeest and Wassenaar (South Holland) see a relatively low share of the 15-year-olds choosing vmbo. Likewise, a relative minority attends vmbo in Utrecht province and in the middle and southern parts of Limburg province.

Among the four largest cities, only Rotterdam has more than average number attending vmbo 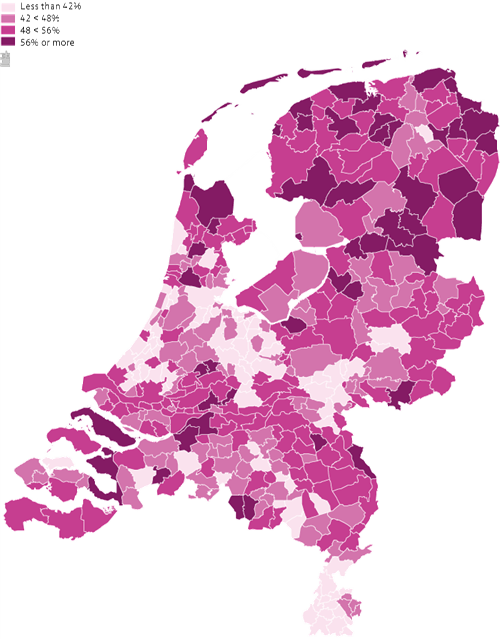